A public discussion and research meeting about mapping technologies and embodiment in the emergent techno-sensuous spatial order of Affect Space.

Since 2011 we have witnessed a recurrent global media spectacle where massive protest gatherings in public space seem to emerge from out of nowhere, accompanied by an avalanche of self-produced media mostly distributed over the Internet. From Puerta del Sol in Madrid to the streets of Istanbul, Ferguson, Haren and Paris (Je (ne) Suis Charlie), this recurrent spectacle appears across vastly different contexts and around a wide variety of issues. The pattern we see in these gatherings remains remarkably constant: Affectively highly charged mobilisations via the Internet spill over into public space, but because this public space is awash with mobile media and wireless networks, the “action in the street” immediately feeds back into the media network. How do we understand and engage with these massive ephemeral events and the techno-social dynamics producing them?

Following up on the essay Affect Space written for Open! by media theorist and researcher Eric Kluitenberg early 2015, Open! together with LAPS, the MIT ACT Art Culture and Technology program in Boston, and Het Nieuwe Instituut in Rotterdam has launched a public research trajectory to explore these dynamics beyond the protest gatherings themselves.

In this meeting we discuss how the emergent techno-sensuous spatial order of Affect Space can be mapped using the very technologies that produce these new dynamics. We also question how the body is situated in these dense spaces as both an affective receptor and amplifier?

This meeting is followed by a public program organised in co-operation with Het Nieuwe Instituut in Rotterdam on Friday May 20 around the question ‘How to design Affect Space?’ In parallel to these public discussions a series of six commissioned essays will be published on the Open! platform.

Talks and presentations by: 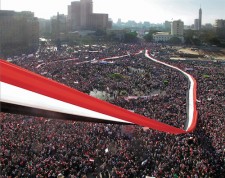 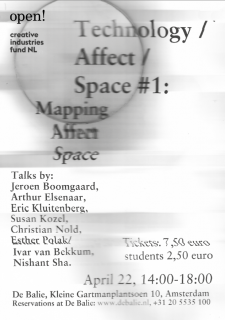