The Professorship of art and public space organizes a symposium on the transformations of the public realm and the possibilities for art and design to play a role there since the 1960s.

Dutch policies regarding public space have a long history of ideas on the communal and educational potentials of visual art. Shifts in concepts and practices of public space as well as concepts of art have given this tradition new directions.

During the last decades artworks have for instance been functioning as stimuli for the senses, as demarcations for specific places and spaces, and as agents for social change. This symposium focuses on the relation between art and the public domain in the post-industrial societies and more specifically on the transformations during the last 40 years.

The symposium is divided into three sessions.

Chantal Mouffe
Lecture: The concept of the agonistic approach towards public space
In this presentation I will discuss the different ways to envisage the public space and  scrutinize the implications of this discussion for artistic practices. My argument will be that public art is not art located in a place which is public (in opposition to a private space) but art which institutes a public space, in the sense of a common action among people. One of the questions that I will address is for instance what kind of public should progressive art institutions try to institute, a public space aiming at establishing consensus or a public space of agonistic confrontation. Taking my bearings from my previous work, I will first show that the task of democratic politics is not to aggregate interests or to attempt at reaching a rational consensus but to transform antagonism into agonism. Then I will draw the consequences of this approach for understanding the relation between art and politics and grasping the nature of critical artistic practices. I will argue that what is at stake is the questioning of the dominant hegemony by bringing to the fore all the aspects that the dominant consensus is trying to repress. I will insist on the multiplicity of ways in which this consensus can be undermined and show that artistic practices can contribute in a variety of ways to the fostering of new forms of subjectivities.

Maarten Hajer
Lecture: Navigating the Archipelago of Enclaves: Art and the Mental Maps of the City.
The lecture will reflect on the recent urban conflicts in Europe. It is a call for a public domain strategy for fragmented cities within which art will play a central role.

Maarten Hajer is Professor of Political Science and Public Policy in the Department of Political Science (University of Amsterdam), since 1998. He is a Member of the Amsterdam School for Social science Research (ASSR) and of the Amsterdam Institute of Metropolitan and International Development Studies (AMIDSt), as well of the. advisory board of the Ministry of Public Housing, Spatial Planning and the Environment (VROMraad The Hague). Before taking up the Professors’s Chair at the UvA, he worked as senior researcher at the Scientific Council for Government Policy (WRR) in The Hague (1996-1998); as ‘wissenschaftlicher Mitarbeiter’ with Ulrich Beck at the Ludwig-Maximilians-Universitat in Munich (1993-1996), and as researcher at the Leiden Institute for Law and Public Policy (1991- 1993). He holds MA degrees in Urban and Regional Planning (University of Amsterdam, 1987) and in Political Science (University of Amsterdam, 1988); as well as a D.Phil. in Politics (University of Oxford, 1993).
He is currently working on a book for Oxford University Press provisionally entitled Performing Politics – Understanding the New Policy Conflict.

Liam Gillick
Lecture: From Kalmar to Uddevalla: Smooth s Spaces and Empty Factories.
The lecture relates to Gillicks’ work in the last few years in exhibitions and writing that deals with the notion of post-industrial behavior in consensus cultures, where we assume that there is no problem.

Marjetica Potrc is an artist and architect based in Ljubljana, Slovenia. Her work has been exhibited extensively throughout Europe and the Americas, including the Sao Paulo Biennial (1996 and 2006) and the Venice Biennial (2003). She has had solo exhibitions at the Guggenheim Museum (New York, 2001), the Max Protetch Gallery (New York, 2002 and 2005), the Nordenhake Gallery (Berlin, 2003), the PBICA (Lake Worth, Florida, 2003), the List Visual Arts Center at the Massachusetts Institute of Technology (2004), and the De Appel (Amsterdam, 2004), and elsewhere. Her many on-site installations include Dry Toilet (Caracas, 2003), Balcony with Wind Turbine (the Liverpool Biennial, 2004) and Genesis (2005), which is on permanent display at the Nobel Peace Center in Oslo. She has also published a number of essays on contemporary urban architecture. In 2005, she was a visiting professor at the Center for Advanced Visual Studies at the Massachusetts Institute of Technology. She has been the recipient of numerous grants and awards, most notably the Hugo Boss Prize (2000) www.potrc.org

Bik Van der Pol
Lecture: Public Platforms
Art projects will be taken as examples to consider questions of the role and responsibility of the artist towards whatever we understand as ‘the public domain’. How can one deal as artist with the public domain? Which are the consequences for the artwork? And which are they for the art institution that finds itself confronted with new forms of art, as well as new conditions in art production?

Bik Van der Pol’s work concerns the development of appropriate media with which to realize works collectively through continuously broadening notions of interaction and collaboration. Their work engages with revitalization of memory in the present and with questions of knowledge and history, thus creating the necessary potential for a dialogue and an ever reforming discourse through which they develop an understanding of situations that surround us.
Circulation of knowledge and re-use of existing and left-over spaces, forms and situations are important strategic tools in the work of Bik Van der Pol. Critically and constructively they address ‘normal’ situations. Not by adding yet another new idea to the cycle of production and consumption, but by revising and re-activating an existing situation. Exhibitions (selection): Fly Me To The Moon, project for the New Rijksmuseum, Amsterdam (2006), On Mobility, De Appel, Amsterdam (2006), Büro Friedrich, Berlijn (2005), Rec., Esther Schipper, Berlin (2005), Project Rotterdam, Museum Boijmans Van Beuningen,Rotterdam. Reclaiming a space: works and projects, FRAC Nord-Pas de Calais, Dunkerque, 2002.
www.bikvanderpol.net

Logo Parc
Lecture: Logo Parc is a design research project that addresses one of the flagship projects of recent Dutch spatial economy: Zuidas (South Axis) on the fringes of Amsterdam. As a business center and future destination for the global elite, Zuidas can be read as a place where ‘traditional’, state-initiated public space policies clash with the characteristics of spaces created from and branded by the global flows of capital and investment. As much as Zuidas depends on a ‘designed’ façade and a key role for design in maintaining its symbolic regime, at the same time, the clash between public and private, the clash between municipality and investors at Zuidas, is precisely the factor that escapes design – as it is this factor that remains unresolved, or lays bare, in the resulting public space.
Logo Parc is investigating what it is that characterizes Zuidas in this perspective, and what the resulting cityscape implies beyond the over-simplified assumption that it is public.

Stephen Wright is an art critic, program director at the Collège International de Philosophie (Paris), and professor of philosophy at the École Supérieure des Beaux Arts de Toulon. In April 2004, he curated The Future of the Reciprocal Readymade (Apexart, New York) and is currently working on In Absentia (Passerelle, Brest), as part of a series of exhibitions examining art practices with low coefficients of artistic visibility, which raise the prospect of art without artworks, authorship or spectatorship. He lives in Paris, and is PARACHUTE’s correspondent in France.

Anne Pasternak
Lecture : Organisatorial strategies for public space. Keeping it Real:
A Consideration of Creative Time’s 33 years of presenting Experimental Art in New York City. Pasternak will share the values and strategies that have guided this veteran public arts organizations’ work over the past 3+ decades, with a more detailed discussion of projects by artists Doug Aitken, (public commission with MoMA 2007), Vik Muniz, Cai Guo-Qiang, Jenny Holzer and more.

Anne Pasternak is the President and Artistic Director of Creative Time In New York City. Creative Time has been commissioning and presenting innovative art in New York City since 1972. Under Pasternak’s direction, renowned projects have been realized ranging from exhibitions and performances in the historic Brooklyn Bridge Anchorage, sculptural installations in Grand Central Station’s Vanderbilt Hall, sign paintings in Coney Island and skywriting over Manhattan to the Tribute in Light, the twin beacons of light that illuminated the former World Trade Center site six months after 9/11. Pasternak has been committed to initiating projects that give artists opportunities to innovate their practice, preserve public space as a place of creative expression, and respond to timely issues. Over the past decade, she has been working closely with artists such as Doug Aitken, Laurie Anderson, David Byrne, Jenny Holzer, Gary Hume, Vik Muniz, Takashi Murakami, Shirin Neshat, Steve Powers, Cai Guo Qiang, and many more.
In addition to her work at Creative Time, Pasternak curates independent exhibitions, consults on urban planning initiatives, and contributes essays to cultural publications. She lectures extensively throughout the United States and Europe, and has served as a guest critic at Yale University and continues to teach at the School of Visual Arts.
www.creativetime.org

Jeroen Boomgaard has been teaching Art History of the Modern Era at the Universiteit van Amsterdam since 1983. He obtained his PhD with honours in 1995 with a thesis titled  ‘The Prodigal Son; Rembrandt and Dutch art historiography’. He is working as Professor for Art & Public Space at the Gerrit Rietveld Academie in Amsterdam since January 2003, and holds a position at the Faculty of Building and Architecture at the Technische Universiteit Eindhoven. He regularly writes articles about avant-garde issues and art and public space for Dutch and foreign publications. Recent books include: ‘A Year in the Wild’, a compilation of articles on art and the public domain, Gerrit Rietveld Academie / Universiteit van Amsterdam, 2004
laps-rietveld.nl

Gerard Drosterij is a doctoral student in the Faculty of Law at Tilburg University. He is author of ‘Mind the Gap: Three Models of Democracy, One Missing; Two Political Paradigms, One Dwindling, ‘forthcoming in Contemporary Political Theory (February 2007). He is co-editor of ‘The Possibility of Intercultural,’ a special issue of the Journal for Legal Philosophy and Jurisprudence (2006). He is also co-editor of Intruders: Reflections on Art and the Ethnological Museum (2004). He is finishing his dissertation, called Politics as Jurisdiction, which builds on the public and private in political theory. 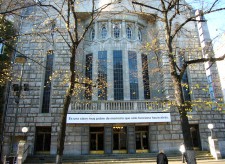 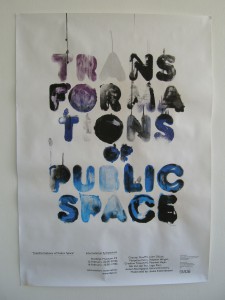