A Symposium on Museums and the City

Introduction
A number of years ago, like many other museums that had outgrown their hundred-year-old housing by the end of the twentieth century, the Stedelijk Museum Amsterdam, opted, together with the city council, for extensive renovation and expansion of the existing building. Paradoxically, this quest for new walls meant that the museum had to make do without walls for some time, which was frustrating for the public and for staff members, who love the building and the collection. However, the temporary closure of the museum has also provided opportunities and invited innovation, creativity and improvisation, particularly in the relationship between the museum and the city.

There is an increasingly strong link between museums and contemporary art institutions and the dynamics of the city. Programs at the Stedelijk Museum, the Van Abbe Museum, de Appel arts centre Amsterdam and the Gemeentemuseum Den Haag are some examples of this interaction, and many other initiatives all over the world reflect the same development, from MACBA to the Centre Pompidou. This “urbanization” of museums is part of a broader cultural development. Many artists intervene in and react to the public space. The various forms of mass media, such as television and the internet, have also freed themselves from their domestic existence, and entered into the city and public space through the increasing use of urban screens, locative media and smart phones. The demand within museums for public programs and education is increasing too, resulting in more activities such as talks, debates and courses, often in collaboration with other parties, which also take place outside the walls of the museum in locations such as community centers, schools and universities.

During the symposium, Juha van ’t Zelfde from Non-Fiction will keep a real-time blog.

The Extra Muros symposium is the result of a partnership between the Stedelijk Museum and LAPS.

In the morning, a number of speakers will focus on the context of the theme “museums in/and the city” and present a variety of innovative projects for discussion with participants.

11.10-11.40
Beyond the Museum: Artistic Interventions in the Urban Realm by Suzanne Lacy (artist and theoretician, Los Angeles)

12.00 -12.20
The Museum and Public Space: A Place You Love to Hate by Jeroen Boomgaard (University of Amsterdam, Amsterdam)

14.00 – 15.00
Experts from a number of museums will present their extramural activities in “Pecha Kucha” style:

15.00 – 16.15
Four parallel workshops led by experts. The aim is to bring participants together to reflect and come up with new suggestions. Themes of the workshops:

v  Museum in Residence – A Portable Space? (Does a museum need a portable building to present programs in the city?) By: Pierre Muylle/ Marlous van Gastel/Sophie Tates

v  The Museum and Society (How can museums help to tackle social issues in the city, such as improving quality of life and assisting integration?) By: Leontine Coelewij/Barbara Berger

v  The Collection Outside the Museum (Is the collection intended primarily for display in the museum or are there ways to allow the collection to play a role in the city – via new art production and public programming?) By: Willem Jan Renders

v  New Institutionalism/Institutional Critique (How can the museum carry out institutional critique and museum innovation through its infiltration into the city?) By: Jeroen Boomgaard/Marcello Exposito

v  The Role of the Artist (How can artists help the museum to go out onto the streets, and vice versa?) By: Suzanne Lacy

Barbara Berger (1957, Germany) is a journalist and anthropologist. For thirteen years she worked for Trouw, one of the Dutch national newspapers, as socio-economic and domestic editor as well as special editor for The Hague politics. She then worked for four years as Head of the Communication and Lobby Department of the Dutch development agency Cordaid. Barbara Berger now works as independent journalist and communication-advisor and started X-Borders, together with Nico Keijzer. As project manager for the Hague’s Gemeentemuseum, she recently developed a district approach in which social activation of neighborhoods plays a major role. More than 20.000 people participated already in the program. She also regularly trains civil servants of The Hague municipality to communicate better on various subjects. In an assignment for CAOP she has written a collection of interviews about the effects of coaching on migrant students. Berger also accompanied the branding of the European Cultural Foundation in Amsterdam. For three churches in The Hague she produced a special newspaper in which the parishioners shared their emotions about the often difficult merger process. She developed communication tools that clarify the dialogue on Aids between Development organisations and the Catholic Church (Cordaid Aids Award).

Leontine Coelewij is Curator of the Presentations Department at the Stedelijk Museum. She was the founding curator of the Stedelijk Museum Bureau Amsterdam (1993-1998). In recent years she has curated solo exhibitions with Tobias Rehberger and Michel Majerus and group shows such as 20/20 vision (2004, with Mathias Poledna, Steve McQueen and Marc Bijl); Time and Again (2004, with Paulina Olowska, Wilhelm Sasnal, Roman Ondak and Deimantas Narkevicius); Mapping the Studio (2006); and Mapping the City (2007). In 2009 she curated a special site-specific project in Amsterdam New West with Marjetica Potrč and Wilde Westen, De kok, de kweker, zijn vrouw en hun buurman, as part of Stedelijk in de stad. She is currently working on a large solo exhibition with the Dutch artist Aernout Mik, which is scheduled to open in Paris (Jeu de Paume) on March 1, 2011, and which will later travel to Museum Folkwang, Essen, and the Stedelijk Museum, Amsterdam. Leontine Coelewij holds an MA degree in Art History from the University of Amsterdam.

Marlous van Gastel has worked at the Education Department at the Stedelijk Museum since 2006. She studied Art History at the University of Utrecht and wrote her final thesis on the social relevance of art museums. She has worked on a variety of projects for the Stedelijk Museum and was responsible for the Bouwkeet program during Stedelijk in de stad (2009). She also started up Stad & Taal, a program for adults who are learning Dutch as a second language (2006), and Blikopeners, a peer-education project for young people (2008).

Michiel van Iersel studied Business and Cultural Studies at the Erasmus University in Rotterdam and Metropolitan Studies at the Humboldt-Universität in Berlin. Following an internship at the Museum of Modern Art in New York, he started his professional career at Museum Boijmans Van Beuningen in Rotterdam as an organizer of public and interdisciplinary programs. He has coordinated a wide range of public activities at major cultural events including the Venice Biennale and Art Rotterdam, and has worked as an advisor for numerous cultural institutions. In 2008, he co-founded Non-fiction, an Amsterdam-based office for cultural innovation working with clients such as Museum De Paviljoens and the Royal Concertgebouw Orchestra. He is also the artistic director of De Verdieping, a temporary project space in an abandoned printing plant focusing on experimental culture. He talks and writes about art and culture on a regular basis and has (co-)hosted various conferences on museum innovation, including McMuseum (2002), Open Museum (2008) and Curating the City (2009).

Suzanne Lacy is an artist and writer whose work is focused on interventionist art, policy and the public sphere. Her large-scale public performances and installations, videos, photographic series and texts explore issues relevant to social equity and art’s role in social change. Lacy’s early practice foreshadowed many themes in current debates on relational, analytical, and community-based practices. She has published over 70 articles, some featured in an upcoming book: Leaving Art: Writings on Performance, Politics, and Publics; a book on her work, Spaces Between: Suzanne Lacy has just been released. Her book Mapping the Terrain: New Genre Public Art (1995) – now in its third printing and published in Chinese – was responsible for coining the term and articulating the practice. Lacy has designed college-level programs and held administrative and teaching positions. She designed and currently chairs the Master’s in Fine Arts: Public Practices at Otis College of Art and Design in Los Angeles.

Pierre Muylle is the director of the MADmusée in Liège, Belgium. After developing and working on the cultural community based project “wijk up” in Bruges he worked at the S.M.A.K., Museum for contemporary art in Gent, as a curator. His main focus were projects in public space, particularly the “Moscou-Bernadette” project. Since one year he is the director of MADmusée, an ‘outsider art’ museum in Liège. The museum will be closed in 2012-13 for renovation and is working on an outdoor program called NoMAD.

Willem Jan Renders (1955) studied Art History in the Netherlands and Italy. Subsequently he has worked at the Museum Boijmans Van Beuningen in Rotterdam and after that as Head of Communication at the Kunsthal Rotterdam. Since 1996, Renders is at the Van Abbe Museum in Eindhoven, first as Head of Communication, then as Head of Education and since 2009 as Manager Public Programming. In this function Renders is responsible for developing programs for new target groups. In addition to this he is active as a free-lance curator and writer.

Margriet Schavemaker is an art historian, philosopher and media specialist. Following a career as a lecturer and assistant professor in the art history and media studies departments at the University of Amsterdam, she currently holds the position of head of collections and research at the Stedelijk Museum Amsterdam. Schavemaker has written extensively on contemporary art and theory and has (co-)edited several volumes including Now is the Time: Art and Theory in the 21st Century (2009) and Vincent Everywhere: Van Gogh’s (Inter) National Identities (2010). She is also an acclaimed curator of discursive events and public programs. New media have been high on Schavemaker’s agenda in recent years, resulting in activities including the ARtours project: the creation of an augmented reality platform for smartphones which can be used by museums to present their collection in innovative and interactive ways both inside and outside the museum.

Juha van ‘t Zelfde is a writer, radio presenter and curator of sound, music and media culture. He has worked for Muziekgebouw aan ‘t IJ, Bimhuis, Stedelijk Museum and other international arts institutions. He has a strong interest in innovation in the arts, both at the individual level of the artist and the aggregated level of the institution. He was previously one of the directors of the n8 foundation, a collaborative research and development organization set up by the Amsterdam museums collective, focusing on engaging young audiences through the use of information technologies and cutting-edge programming. From 2007 to 2010, he presented a regular radio program for Dutch public radio NPS and VPRO on contemporary electronic dance music. He is co-founder of Non-fiction, an Amsterdam-based office for cultural innovation, and of VURB, a research vehicle in the nascent domain of networked urbanism. He also founded Viral Radio, a network for experimental sound and music. 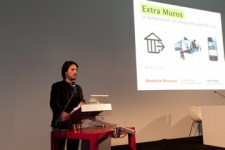 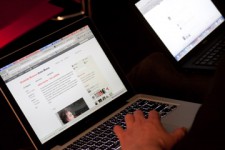 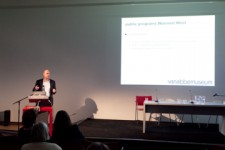 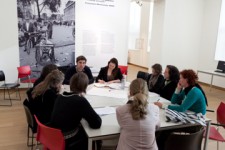