A symposium about Dutch urban landscapes of the 21st century

Cultural Perspectives for the Dutch Metropolis
Throughout the ages and everywhere, cities have been the focal point for art and culture. It is with this realisation that City thoughts pose the question of how the ongoing process by which the Randstad in the west of The Netherlands (Amsterdam, Utrecht, Rotterdam and The Hague) is becoming one metropolis relates to contemporary cultural developments. What is the role of art and culture on the stage of the Dutch Metropolis-in-formation?

Urban Exploration
The project begins with an urban planning investigation onto the development of the Randstad. The strict separation of city and landscape, which has formed the base for Dutch regional planning for the last fifty years, can not be maintained in the 21 century. If The Netherlands is to remain a player in the world economy, the Randstad must inevitably evolve from a collection of independent cities surrounding an agrarian heart into a unbroken suburban cityscape.

Cultural Scenarios
On the basis of this urban planning investigation, seven experts on aspects of contemporary culture have each written a scenario for the role of art and culture on the stage of this Dutch Metropolis in formation. In order to obtain a diverse picture of the cultural perspectives of metropolis-forming, the experts invited come from diverse cultural backgrounds: art history, literature, architecture, landscape design, visual arts, photography and new media.

Suburban Curating Exhibition
The event will be closed off during the course of 2006 with an exhibition. The seven scenario writers are given the role of Suburban Curators, and present work by one or more artists or designers which give visual form to their scenario. The results of the event will be recorded in a publication, and can be followed on the Citythoughts website.

Participants:
Since 2001 Aaron Betsky has been Director of the Nederlands Architectuur Instituut in Rotterdam.  Between 1995 and 2001 he was curator of Architecture, Design and Digital projects at the San Francisco Museum of Modern Art.  He organised more than fifty exhibitions and many lectures and symposia there.

Jeroen Boomgaard is reader in Art and Public Space at the Gerrit Rietveld Academy and the University of Amsterdam. In addition he teaches in the Architecture Department of the Technical University, Eindhoven. In 2004 he published Een Jaar in het Wild, essays on art and public space.

The Amsterdam artist Hans van Houwelingen focuses primarily on art in and of the public domain. In all his work, on the basis of a contextual analysis he seeks to influence and/or reconstruct existing or newly arising situations in public space. This can take shape by the placement of an artwork or in the design of the environment itself, or in the problematisation of theoretical questions. Van Houwelingen employs artwork as a political medium that is engages over a broad political field. His recently published book Stiff: Hans van Houwelingen versus public art, includes a number of his texts, and describes many of his realised and unrealised projects.

Steven Jacobs is an art historian specialising in photographic and cinematographic representations of architecture, the city and landscape. He is instructor in film history at the Sint Lukas Hogeschool in Brussels and at the University of Utrecht. In addition he teaches urban studies at Erasmus University, Rotterdam.

Geert Lovink is a media theoretician and critic. Since January, 2004, he was been senior lecturer at the University of Amsterdam and reader at the Hogeschool van Amsterdam Institute for Network Culture. He organises conferences, festivals and online publications, and has set up diverse internet projects such as www.nettime.org and www.fibreculture.org. He recently published the books Dark Fiber (2002), Uncanny Networks (2002), and My First Recession (2003).

Wouter Reh is a landscape architect, and since 1994 senior lecturer in the Architecture Department at Delft Technical University. His dissertation Arcadia en Metropolis, on the anatomy of the picturesque landscape as it took shape in the development of the English landscape garden, appeared in 1996. In 2003, together with Clemens Steenbergen he published Architectuur en Landschap. In 2005 the same two authors brought out Zee van Land, together with Diederik Aten. He is presently working on a large-scale design study of urban parks and urban landscapes, under the working title Urban Landscapes.

Dirk van Weelden graduated in philosophy 1983 and had his debut together with Martin Bril in 1987, with their Arbeidsvitaminen, het ABC van Bril & Van Weelden. His solo debut, Tegenwoordigheid van geest, appeared in 1989. His later novels include Mobilhome, Oase, Orville and Looptijd; he has also had two collection of essays and short stories, Van Hier naar Hier and Straatsofa (2005).
He is editor of the Gids and Mediamatic. He is presently writing a novel to appear in the autumn of 2006.

Organisation:
Suburban Scenarios is organised by Citythoughts Foundation in cooperation with Citythoughts Architects, the Lectoraat Art & Public Space (Gerrit Rietveld Academie) and Stedelijk Museum CS. The project has been made possible by financial support from the Mondriaan Foundation, BKVB Fund, AFK and De Principaal. 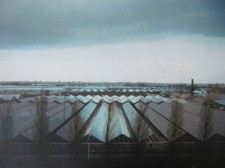