For the past few years Maartje Fliervoet has been working on two historical sources from very different times and locations that share some visual characteristics. One is a Palaeolithic ochre fragment excavated from the Blombos Cave in South Africa (+/- 77.000 BC) and the other is a set of correction marks in the handwritten manuscript of Rainer Maria Rilke’s Die Aufzeichnungen des Malte Laurids Brigge (1910). After careful consideration, Rilke’s corrections have proven helpful to think about the western reception of the ochre fragment.

In one of his letters Rilke mentioned he saw himself being part of a tradition of a tradition of an uninterrupted ‘chain’ of poets. If unused, knowlegde and skills for ‘intellectual creation’, would be passed on from one man to another “like [in] a sealed letter”. Such a chain brings to mind an image of perpetuation of a continuous lineage of male succession. This mental image got Fliervoet thinking about the ochre fragment’s ongoing ‘analyses’. It is in the mechanisms set to work in this type of tradition that the two sources seem to be related.

All scientific articles she reads on the ochre fragment use the term ‘engravings’ when referring to the scratches on the ochre. Yet there is no evidence whatsoever that these traces have any intentional relationship with what we now call ’text’ or ‘art’ – the two realms the term ‘engraving’ has been etymologically tied to. Instead, it seems that the field of archaeology is still bound up in a 20st century western European tradition, in which words that may lead to unfounded assumptions seem to be blindly passed on from one generation of archaeologists to the next.

This project consists of a wallpaper frieze and a silksreened textile piece that will be presented during the group exhibition Sufferin’ Succotash at puntWG organised by Martín La Roche Contreras in May 2021. The frieze incorporates two letters for which a special font, the OPS Scratch, has been developed by former Kenniskring participants Our Polite Society. Ilse van Rijn has contributed to this project as a writing coach and advisor. A first version of the work has been silkscreened at Frans Masereel Centrum in 2020. 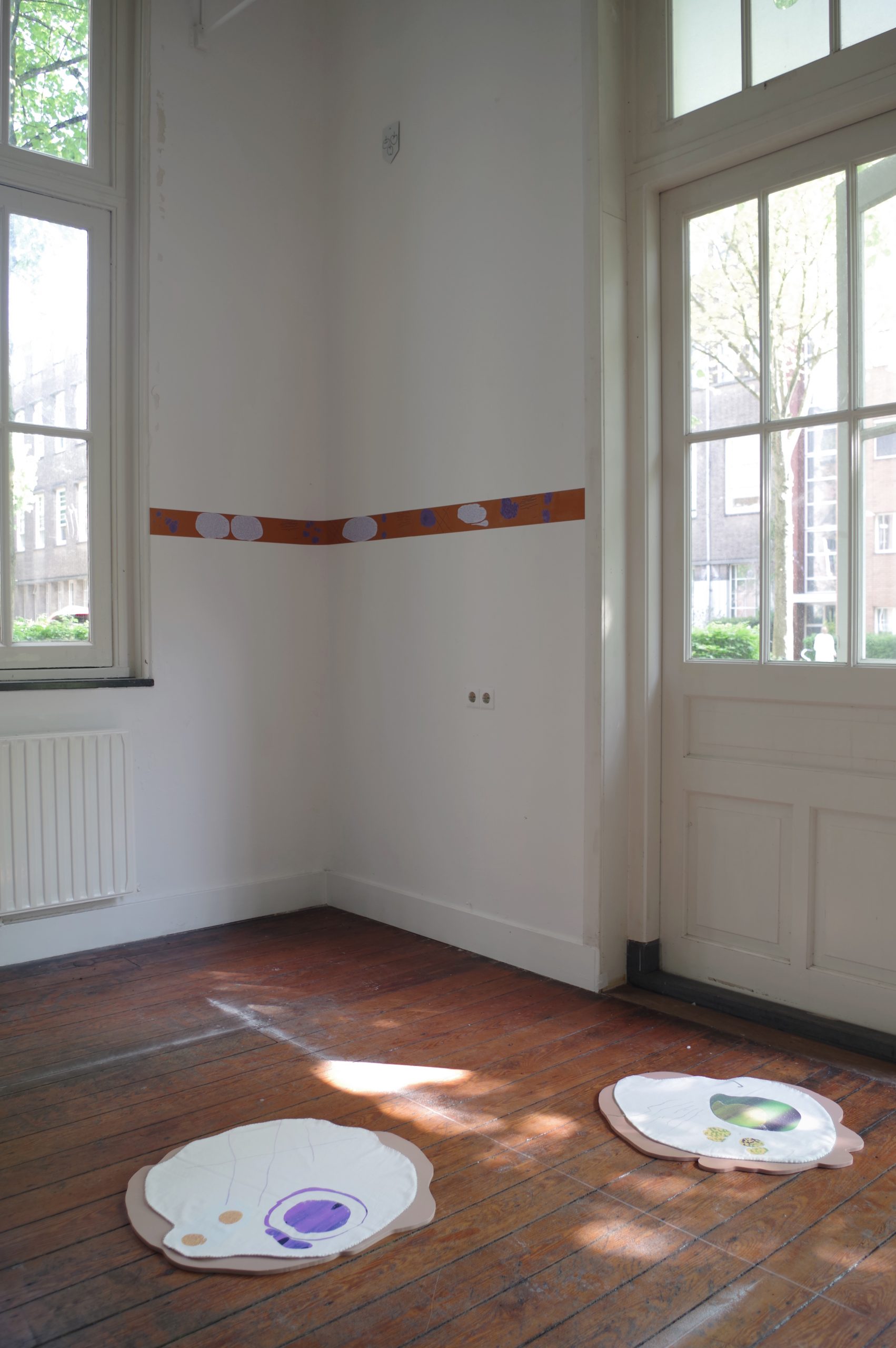 Maartje Fliervoet is an artist based in Amsterdam. A selection of institutions she exhibited at: A.VE.NU.DE.JET.TE Institut de Carton and Wiels CAC, Brussels, Grimmuseum, Berlin, Lokaal 01 Antwerp, Kunsthal Ghent, Kunstverein Göttingen, Rozenstraat 59, Kunstverein and SKOR, Amsterdam. A selection of residencies in which she participated: Pompgemaal Den Helder (2018/19) Frans Masereel Center (2016 and 2020), Air Berlin Alexanderplatz (2013), Lokaal 01 Antwerp (2011) and Wiels CAC (2010). She was trained at the Gerrit Rietveld Academie, Cooper Union, Sandberg Instituut and the University of Amsterdam.

From 2012 to 2018 Maartje Fliervoet worked as a tutor at the honours programme ART and RESEARCH of the University of Amsterdam and the Gerrit Rietveld Academie. She is the initiator of the project space Manifold Books, founded in 2015. In 2019, together with Martín La Roche Contreras and Arefeh Riahi she formed To See the Inability to See, a research group on archives.

In Defiance of the Building