An artistic investigation (Saskia Janssen for the Kenniskring LAPS) into the creation of a group self-portrait, loosely based on scientific research by Dr. Peter Witt from 1954.

Since March 2006 I have been visiting the drug users’ room Blaka Watra on a weekly basis: a special room where hard drug users can use drugs under supervision. The phenomenon of drug user rooms came into being in the 1990’s; on the one hand to limit the nuisance on the street caused by drug users, thus establishing a safer feeling by making them invisible. And, on the other hand, enabling the user to take his or her drugs in a hygienic, quiet and safe manner. It also offers them a social environment. A user room is a Dutch invention. Many different foreign shelter organizations come to visit and study this Dutch model each year.

Blaka Watra is situated in the centre of Amsterdam, within walking distance of Central Station and the area of the Wallen (the Red Light district). Actually it is like a small ‘piece of street’, but with a roof on top that falls under the jurisdiction of the Dutch policy of tolerance. The drugs used here are ‘white’ and ‘brown’; cocaine and heroine; smoked in a pipe or from a piece of tinfoil. The visitors are all long-term drug users, often for more than 20 years. Blaka Watra is a user room especially for users with Surinamese and Antillean backgrounds, most are between 40 and 60 years old.The larger part of this selected group came to Amsterdam after Surinam became independent. Since the 1980’s they have formed a close ‘user family group’ and they share the days and survive together.

Seven days a week the visitors see each other between 11:00 am and 19:00 pm in the user room where the main part of their social life takes place. It is a small, invisible community with its own laws, its own language, its own economic system and its own ‘health care system’.It shows us a classic example of sharing the sweet and the bitter. Stealing from and taking care of each other go hand in hand.

For my research I visit Blaka Watra every week.  In the beginning, it was the drugs that mostly got my attention. It is strange, and sometimes fascinating, to watch a group of people take hard drugs at their leisure, and to see the immediate effects thereof. But, after a while this disappears. It became a normal, everyday sight and I began to clearly see the different characters/persons, perhaps even enlarged because of their drug use.

I wanted to investigate how I could portray this exceptional group of people, how to ‘record’ them and in this way ‘preserve’ them for the future. But not in the usual way, the way in which a documentary photographer only records the outside. The photographic portraits of drug users that I had seen in the past years did not show me what I wanted to know. They were only images acting as warnings, photos of suffering, or sensational photos made to show them in all their nakedness.This is something the visitors of Blaka Watra hate most of all.

I wanted to investigate whether there was a way I could make the user group create their own self-portrait, without having a pre-conceived idea on my part of how this portrait should look. Moreover, I did not really want to make an external portrait, but a sort of ‘mind’ portrait, a portrait of the mood, the connection, and also the diversity within this group. I was searching for a way to transform all these aspects into something visual.
A large number of sketches are made in the user room. I don’t know exactly why. Probably because it is such a direct activity – visitors are mainly sitting at the table all day long and a pen and paper are always nearby. Perhaps it is relaxing to absent-mindedly let your pen draw lines on a piece of paper, or it prevents you from becoming bored. Or perhaps the ‘white’ and ‘brown’ give people so much inspiration and food for thought that they have to do something with their trains of thought. The walls and furniture are also covered with sketches. At closing time the tables are covered in blackened strips of silver foil, plastic cups, cigarette butts, many pieces of paper covered in sketches, folded pieces of paper that were wrapped around the ‘white’ or ‘brown’ and rolled up pieces of paper that were used to inhale smoke. Miniature sketches express the mood of the day. Some are very precise and realistic, others show mysterious scenes.

Staff and visitors save these sketches for me in a special box in the windowsill when they clean the room. All these drawings together form a whole that shows the different characters. I regard this collection as an unconscious self-portrait. It is the starting point of the portrait I want to create. A drawn, group self-portrait that depicts the individual characters.

One of the visitors, Herbert, clearly has a talent for drawing. His drawings are more refined, more realistic and more aware of the subject matter than those of the others. One of his drawing methods stems directly from his use. He copies the black spots left on the silver foil after smoking onto paper and, while still under the influence of the drug that caused the spots in the first place, he transforms them into pictures that occupy his mind. One day I saw a drawing of blood circulation and a drawing of a family with two children.
From a friend I heard that there are pictures of spider webs that were made by spiders under the influence of different kinds of drugs.It was scientific research conducted by the Austrian pharmacist Dr. Peter Witt in the 1950’s. In order to visualise the effect of the different sorts of drugs, he fed the spiders flies drenched in drugs. The drugs influenced different parts of the nervous system and caused a difference in the ‘spin’ results. Routine behaviour is influenced and visualised in each spider’s web. The photographs by Dr. Witt clearly show what that influence is. In most cases, the web can no longer perform its initial purpose. Some webs no longer have a systematic structure, they are a chaos of holes and knots and asymmetric lines. Others miss all cross-connections, but form a wonderful star-shaped composition without any purpose.

One day I had a discussion with the users about the influence the drugs have on their everyday life. What it means when the logic of things escapes you because of your long-term use. One of the visitors, Caroline, told me that it sometimes took her an hour to do something very simple, like cleaning the table. Time and time again she had to remember where to put the items and why, and then she did it wrong anyway. Each week I asked a visitor to draw a spider web and to tell me something about it. After having drawn the web, I showed the visitor pictures of webs made under the influence of drugs as well as the research by Dr. Witt and my own research.

The moment a number of drawings were made, and put next to each other, the portrait began to take shape in front of my eyes. Not to compare the visitors with spiders, not to see which drug they had used, but to see the characters appear from the drawings. The drawings were either made with pure technical precision, or as metaphors for the user’s life or, sometimes, only after hours of hesitation and uncertainty about what a spider web looked like anyway. And once just in exchange for a cigarette.

Blaka Watra has 34 registered visitors. Thus far the collection has 27 spider webs, as some visitors are momentarily stuck in another web.  Saskia Janssen is working on interviews with the visitors about their drawings and the complete investigation will be published.

Saskia Janssen is a visual artist living and working in Amsterdam. Her work often centres on specific groups of people where she is concerned with making a situation visible from a personal fascination. Janssen is a lecturer at the Academy for Art and Design in ‘s Hergtogenbosch and the Gerrit Rietveld Academy. Janssen has conducted research into intercultural art education at the Lectorate Art and Public Space. In 2009, the Lectorate also published ‘Blaka Watra Spiders’ the result of her artistic research into the visitors of the Blaka Watra space for drug users in Amsterdam. 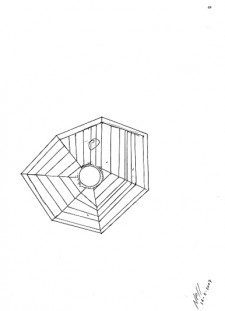