Education project with the department Image and Language

In collaboration with the Communication Department of the Province of South Holland and the Government Service for Land and Water Use, the Lectoraat Art & Public Space and the Language and Image Department of the Gerrit Rietveld Academie have launched an education project inspired by plans to create the Bentwoud forest area.

Bentwoud is a forest in the making. A forest that will arise from the clay of a reclaimed section of land in the Randstad, between Zoetermeer, Benthuizen, Boskoop and Waddinxveen. The forest location has been commissioned by the Province of South Holland and will be designed and realised by the Government Service for Land and Water Use or DLG. The new location will number around 3.6 million trees on approximately 1300 hectares. It will be intersected by the high speed rail link and N209 motorway. Highway crossings will be built for the safe passage of animals. The forest is designed as a recreational area and as a barrier against the expansion, at a rapid rate, of construction projects into the ‘groene hart’, the central green zone surrounded by Holland’s major cities. A sizeable stretch of the polder destined for the new forest, is still in active use as farmland.

The development of Bentwoud is the starting point for the project. The entire process of conceiving, designing and installing a landscape touches on a gamut of fascinating themes.
Mankind has always attempted to understand, exploit and cherish his environment. People try to make it safer, more beautiful or profitable. Investigating the way in which people relate to the place they live in is intriguing and meaningful. When does someone feel at home? What does a landscape mean to its creators, managers, users? Who has the right to change a landscape? What is the value of the history of a place?

Our main concern is with the people involved in the creation of Bentwoud. Broadly speaking, two parties are involved: those who belong to the polder, the landscape fated to disappear; and those who belong to the forest, the landscape destined to appear. Project developers lure city dwellers to the green residential development of Oosterheem in Zoetermeer with the promise of a forest in their own back yard. Farmland is compulsorily purchased because it must be given over to forestation. Designers study plants, soil types and animals in a bid to create a harmonious new area.

Some who belonged to the disappearing landscape have opted to go with the new plans for their surroundings. One farmer has turned part of his land into a golf course. While a fruit-grower whose orchards shrank from eight to two hectares has opened a farm shop and juicing plant. But not every polder-dweller embraces the coming of the forest. Keen to retain the wide vistas of the polder, they resist its imminent be-planting.

Whatever people’s attitudes, without them farmland would not have materialised from water, and there would have been no polder to be magically displaced by forest. In the project, the productive landscape that has fallen from grace will be just as crucial as the brand new promises of recreational nature. 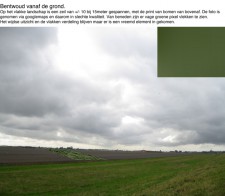