For artists, the Dutch landscape is both a temptation and an ordeal. The open fields and farmland, the endless expanses with their typical Dutch skies and their clear delineation between the horizon and buildings seem to demand intervention and signification. The first works of Land Art appeared at the end of the 1960s on the land parcels of Albert Waalkens in Finsterwolde and soon became mythical in the art world in the Netherlands. Dennis Oppenheim sowed grain and harvested it in unusual patterns. Soon thereafter the land works Observatorium by Robert Morris and Broken Circle, Spiral Hill by Robert Smithson were realized as part of the Sonsbeek buiten de perken exhibition. What unites these works is their scale, their use of available natural materials – they are literally rooted in the ground – and the way they want to reject the world of tradable commodities. In the landscape they step outside the frame and seek to join with what the artists see as fundamental elements and characteristics. Nature as non-cultural space must free art from side issues, and restore its ability to revise the habits of perception.

Land Art
This premise was especially true at the site where Land Art was conceived: in the endless plains and wilderness of North America. But at the same time this was not entirely a romantic longing for the pristine, for a situation not contaminated by man. The disorderly, the chaotic, the almost shapeless – as in the desert, but also in abandoned industrial landscapes – became the favourite surface. It was only there, in one and the same movement, that the connection of art with the primal forces of nature, and the power of the artist to shape these forces, could become visible. In the duality of that gesture also lies the ambiguity of early Land Art. Although the relationship between man and nature is central to each work of Land Art, that same relationship is presented unilaterally. While human intervention seems absent or lost in the physical works themselves, it is given all the emphasis in the heroic photographic documentation accompanying them. The artificial aspects were initially side-lined, only to be able to assert themselves even better.

Artificial Holland
The Dutch cultivated landscape does not lend itself to this scheme, however. Tautly stretched on the framework of drainage ditches, this landscape presents artists with an insurmountable problem: the intended work of art was preceded by another. Holland is entirely artificial – there is not a blank spot to be found. Like a prefabricated painting, it thus threatens to turn art into a trick. Morris and Smithson were aware of this danger. Observatorium was originally located in the dunes at Santpoort-Noord, and Smithson’s well known work was located in a sand quarry near Emmen. These are both sites of overgrowth and entropy.

In the Wilhelminapolder, chaos and decay seem hard to find, and Michael Beutler had to take for granted the spatial organization that preceded his work Polder Peil. But precisely in Zeeland, chaos in the form of inundation is always lurking: the irresistible power of churning water that overwhelms everything and obliterates all traces of habitation and cultivation. And for Zeeland, this is precisely why the idea of planned entropy – where the land will be ‘de-cultivated’ and returned to nature, possibly even to the water itself – is unbearable. That is the ambiguous context in which Beutler has created his work.

Aberrant
Beutler’s work deviates from the established tradition in Land Art. The material with which he works does not come from the site, the shapes do not arise from the landscape, but are added as separate elements. In their seriality and concrete presence, they can be related to the Concrete Works , which were made by Donald Judd between 1980 and 1984 in the countryside near the Texas town of Marfa, and which can seen as a new phase in Land Art. In both cases the elements, due to their almost mechanical repetition and uniformity, do not fit well into the concept of sculpture, but at the same time they show an emphatic artificial intervention in the landscape and do not want to simply nestle there unnoticed (as is the case with much Land Art). However, the difference between the works could not be greater. Judd’s concrete armatures attempt to frame the disordered Texas landscape and make it accessible to the viewer, but they have also become dominant elements in the landscape itself. In contrast, Beutler’s bulbs adapt themselves to their environment. They are scattered across the landscape like symbols, but nowhere do they encompass it or leave their mark. The question is what these works actually mean, in and for the landscape. In photographs, Judd’s concrete frames seem to overcome nature with ease. In reality, however, they are located in the back garden of the Chinati Foundation, and the Texan desert has absconded. As a result, they have acquired something superfluous, like large planters in a stunted garden. For Beutler’s objects, the opposite applies: due to their unforced presence, they can grow with the changes in the landscape and are not in danger of becoming garden decorations.

Sowing
Polder Peil adds shapes to the polder that are half organic and half artificial. This makes them difficult to place. What are these bulbs about, half sunken or stacked on each other and randomly cut? At first glance they remind one of seeds that have been dropped by an alien civilization onto the polder to germinate and take over the land. But this fantasy has its roots in the same American desert landscape as the first works of Land Art, and can be left behind with them. If they are seeds, then they have not been sown to exterminate us, but to show us how we survive. They could represent the way in which we work the soil, but also the way in which humans, as instruments of nature, can ensure their survival. We sow in order for nature to propagate.

Beutler’s symbols mark the differences in elevation of the landscape and thus refer implicitly to the constant presence of water, the danger of flooding and the battle against chaos. As such, they are perhaps also an announcement of entropy, the process of artificial decline that throws its shadow across the polder. Upon closer examination, however, Beutler’s signals are less pregnant with destiny. They simply show human presence as a permanent and essential – but still disordered – form of organization. Like a natural attempt to occupy the landscape, without delineating it. Beutler’s seeds are not sculptures, but they also do not conceal their artificial character behind natural materials: they are located exactly on the border that we draw between nature and culture.

No ordeal
The Dutch landscape is not an ordeal for Beutler. For him, the artificial character of the landscape, just like its revision into ‘nature landscape’, is a motive to show how we live ‘in the world’. Not in the form of peaceful coexistence, but as permanent organization and reorganization, survival and demise. The artist does not need the pristine or the entropic to emphasize his gesture: his intervention does not present itself as culture opposed to nature, but as culture in nature, without renouncing its artificial character and pretending to be a natural process. He ignores the separation between culture and nature that still determines a big part of our thinking and reasoning. In this region, where unbridled natural forces encounter a tame landscape, humans and nature battle each other and depend on each other. In Beutler’s half organic, half-mathematical shapes, these forces come together. With their bulb shape, they comprise the ambitions and activities of all those who contributed to their realization. Like half-open seeds, they bear the thoughts of everyone who is going to see them. In the landscape, they form points of concentration where nature and culture are allied. Artificially, they trace a setting sun, but in reality they indicate the level of the water in the polder had it not been for human intervention. With this alliance, they not only map out the forces of the polder, they also provide a warning for the future: only when a balance is maintained between these forces can the seed that is sown here germinate and bring forth new forms of life. 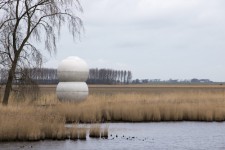