‘“Never waste a good crisis”, economic philosopher Edward Skidelsky poses. In his recent bestseller How Much is Enough? the Brit argues that the government should create a society where people work less and try to live in harmony with each other. In the Western world citizens have become four to five times richer in the last forty years, but not happier. “Politicians should take the ‘good life’ as foundation for their policy, not economic growth.”’

Edward Skidelsky (1973) teaches philosophy at the University of Exeter and mostly directs his research towards moral and political philosophy. He has written several essays on institutional art theory, the intellectual roots of neoconservatism and on the ethics of capitalism. The book How Much is Enough? (Allen Lane, 2012) -in the mean time translated into more than 13 languages- was besides written together with his father, leading economist and Keynes-biographer Robert Skidelsky.

The Knight’s Move  Stroom The Hague yearly organizes a couple of leading lectures called The Knight’s Move with international speakers that distinguish themselves with unusual, clarifying and inspiring visions on the city, urbanity and the public domain. Like the knight that moves on the chess board jumping over bishops, kings and rooks, Stroom wants to give the conversation on the city a new impulse.

The Knight’s Move is made possible by the Creative Industries Fund NL and the Haagse Bluf Fonds. 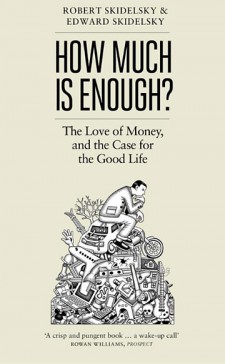