There is always a research element in the daily professional practice of the graphic designer. After all, only analysis, study, reflection and form research can lead to good design solutions. But if you separate the research from the commission situation, you come up against the question of which subject is interesting for further investigation.

We were confronted by this question in the Lectoraat Art & Public Space at the Gerrit Rietveld Academie. We were looking for a theme that not only matched the research area of the group, but was also in line with our own discipline and personal fascination. Our decision to carry out research on the poster as a medium was motived by two considerations.

First, the poster is a graphic design product that is distributed in the city in large numbers, is constantly present, and plays a major role in how we experience the public space. Posters are a part of our visual culture and present a large variety of designed messages with which we are confronted every day. But is the medium investigated and appreciated enough?

Second, we find that the majority of posters, with a few exceptions, are superficial in terms of content and visual quality; they make little appeal to the imagination and are only too often interchangeable. Their form and function often seem to be based on dominant conventions and habitual patterns that are not raised for discussion. As a result, there does not appear to be any actual development. Do we just accept this situation in which repetition, familiarity and clichés have become stock in trade?

We consider it important for this traditional medium to be able to develop and for research to be carried out on new possibilities and applications. But the main question was: From which perspective, with which material, and with which method(s) of artistic research?

MAPPING
First of all we started by mapping the properties that can be relevant for the creation of the design of a poster and how this poster can be read and understood in the public space. We linked these properties within a matrix to eight questions that can lead to new insights. The matrix proved to be above all a good discussion model for analysing posters with related disciplines, but that did not yield the desired result. The question arose of how, from our discipline as graphic designers with a strong urge to make meaningful images, we might be able to take our research further.

FIELDWORK
A rigorous different approach was to go in search of actual physical material. For three months we collected all the posters that were scattered through the city of Amsterdam: a total of 523 different posters. By taking this collection of posters from the public space to the studio, we were able to consider it in a completely different way. We left aside the context in which each poster had been separately developed and had functioned so that we could isolate the material. That gave us scope to work on a visual inquiry alongside our professional practice in which we literally cut straight through the posters in order to dissect them in a later stage.

In doing so we focused on the elementary components of the poster: text, image, colour and composition. Detached from the original design, isolated and combined in new arrangements, these components became the Leitmotiv of an image. This makes it possible to compare them and to shift the focus to the form in which they are manifested. The resulting images are visual data that do not offer any direct, new solutions that can be applied to the poster of the future. Moreover, their value for us lies not in the outcome, but just as much in the development of the different working methods. Both give rise to a renewed awareness, stimulate reflection, and invite a reappraisal of the potential of this fantastic medium.

In order to place this visual research within a theoretical framework, we asked Jouke Kleerebezem to join in our investigation. His textual contribution reports on the various stages, the questions and dilemmas with which we had to struggle, the legibility of the results, and the importance of artistic research within the professional practice of the graphic designer and academic art education. Jeroen Boomgaard’s introduction to the book places the posters back in the space from which we had detached them in order to investigate them: the public domain where they belong. 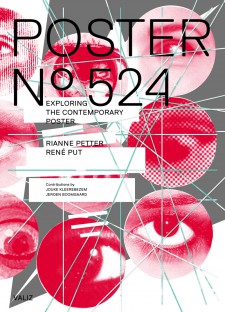 Hiding behind the Laptop