Urban Screens 2005 (23-24 September, Amsterdam) was the first international conference that was solely dedicated to the emerging Urban Screens phenomenon. Presentations covered a broad spectrum of topics and issues, ranging from critical theory to project experiences by researchers and practitioners in the field of art, architecture, urban studies and digital culture. Urban Screens 2005 addressed the growing infrastructure of large digital moving displays, which increasingly influence and structure the visual sphere of our public spaces, and investigated how the currently dominating commercial use of these screens can be broadened and culturally curated: can these screens become a tool to contribute to a lively urban society, involving its audience interactively?

Urban Screens 2006: Demonstrating the potential of public screens for interaction

Building upon the results of Urban Screens 2005, the 2006 Urban Screens 2006 conference (Berlin, Akademie der Künste, October 5-6, in collaboration with the IEB, University of the Arts, Berlin) will elaborate on this discussion. Urban Screens 2006 will be a platform for demonstrating the potential of public screens for interaction in a trinity of infrastructure, content and cooperation models. Interconnected topics will be the politics of public space, multimedia content as a service for an array of portable devices, urban neighbourhood reactivation, interaction design of urban screens, standardisation and integration in the urban landscape. Using existing screens infrastructure as well as future ‘Urban Screens furniture’ in the urban space of Berlin, we will demonstrate the impact of Urban Screens, their contextualisation and situatedness. This unique accumulation of projects will serve as a playground and research field for practical observations on the interplay of screen technology, content, location and format.

Urban Screens 2007: Expanding the potential of content for community screens

Urban Screens 2007 is currently under preparation in collaboration with BBC Public Space Broadcasting. While Urban Screens 2006 will have ‘brick & mortar’ accents, Urban Screens 2007 will have a distinct focus on the potential of journalistic content: issues surrounding the production and display of media content for Urban Screens, as well as adaptive reuse of ‘old’ content for new media will be explored in detail. Key issues and topics will include Public Space Broadcasting (PSB), the politics of public space, mediated interaction and participation, as well as experiments with new participatory formats. PSB can energise the hearts of cities by bringing together communities to share events and broadcasts, creating public news and information points that double as local meeting places, revitalising the public sphere.

Creating a sustainable network around the subjects of research is a major objective of the Urban Screens project. More information: http://www.urbanscreens.org/ 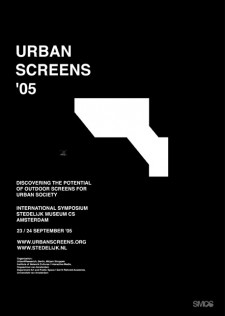