The Zuidas (literally the South Axis) will be the new centre of Amsterdam; a place for living, working, art and culture. But there’s still a long way to go; this monumental plan is very far from completion. And in the meantime, what should be on the cultural agenda of the Zuidas: entertainment for those who work there? Niche activities for miniscule subcultures? Or a giant exhibition space for blockbuster shows?

The role of culture at the Zuidas has been debated for years and there is no shortage of plans. But up to now, nothing tangible has been done. Culture isn’t just about buildings – it’s about doing. Hardware doesn’t work on its own – it needs to be programmed; it needs software. This is why the Research Group Art and Public Space of the Gerrit Rietveld Academie decided to a host a day to look at the kinds of artistic projects that could bring inspiration and culture to the Zuidas. Software is part of Cosmopolis 2025, a project conceived by Amsterdam Bright City.

Most people will be able to recall the family portrait. Complete with aunts, uncles, cousins and distant relatives who are more or less strangers yet closely related. The constructed life invites the public to take the place of one of the family members in this imaginary portrait thereby entering into a relationship with unknown people.
www.evaschippers.nl

The Zuidas has much to offer in the way of architecture and facilities, but no one seems to have given much thought to children. Zuidas Blocks gives children a chance to take part in Amsterdam’s latest business centre. The installation is an economy in miniature, micro-world made out of recycled material, complete with logos and billboards. The installation questions the future influence of the youngest generation.
http://kyokoinatome.com

The installation is situated in a busy square in front of the World Trade Centre and World Trade Centre railway station. The area is planted with trees forming a geometric grid pattern. People cross the square in all directions, hurrying through the trees. A washing line is suspended between four trees. Hanging from the washing line are a number of sheets – huge white sheets of different lengths. They enclose a square space between the trees, a space which opens and closes repeatedly, stirred by the wind.

Four trees and four corners of the flower planters, tiles, a drain in the middle, a view of the sky and the Zuidas skyline. A quiet place where time stands still and space moves. A private moment. A memory.
www.lucialuptakova.nl

‘Hope’ is a temporary art work that exists just for a day. It draws on the Buddhist principles used to create a mandala. A mandala is a concentric diagram with ritual and spiritual meaning, and is found in many cultures. It symbolises the cycle of nature, life and death and the harmony of the Universe. A mandala is an aid to meditation. For the Zuidas, Oldak has created a special mandala which, through its impermanence, refers to beauty and decay as part of human life.
http://picasaweb.google.pl/izabela.oldak

The Zuidas area is developing rapidly. Its towering apartment and office blocks give a three-dimensionality to the otherwise flat Dutch landscape. With Mountain Soundtrack for Skyscrapers the urban sound environment is transformed into a mountain landscape. With recorded footage of a day in the mountains complete with twittering morning birds, the breeze in the trees and the crickets at sunset, the entire atmosphere of the Zuidas will be subtly transformed creating the experience of an entirely different place with a minimal intervention: sound – a seemingly innocuous yet a powerful means of creating mood and atmosphere.
www.concrete-dok.net

Deadline / Flatline explores the Zuidas as a new commercial centre and economic powerhouse. Setting out a grid for enterprise, the detached office architecture incites growth and the pursuit of profit. Van Klaveren challenges this structure by tipping the decor.

Sympathy for the Symphony integrates a typical feature of Amsterdam’s streets – the barrel organ – into the modern, minimalist surroundings of the Zuidas. The history and tradition of the street organ is intimately interwoven with the city, and has its roots in popular entertainment. The buildings on the Zuidas have been named after Western classical composers such as Mahler and Gershwin, and thus refer to the modern, ‘the new’. Sympathy for symphony translates the image into a book for the barrel organ, making the Zuidas audible.

Everyone seems to have a secret. And every culture has its own way of dealing with them. In India, secrets are ritually spoken into a hole in a tree trunk, afterwards plugging the hole with mud to keep the secret safely contained inside the tree. Inspired by this tradition, Tree Hole gives people at the Zuidas a chance to unburden themselves and tell their secret.

A city’s dreams and ambitions are inseparably connected with the history of Modernism and the axioms of progress. Zuid As: Building Urbanity presents a selection of films from different eras that reflect on imaginings of urban space, interspersed with live footage of the Zuidas. Amsterdam’s second centre is set alongside other dreams, and its perspective changes.
http://icu2events.blogspot.com

The objective of every city is to become an efficient, well-run metropolis. In this context, Ballad of Caution reveals how visions of an efficient, wonderful city are also shaped by ideas of a clean city. Perhaps the desire to work in a smart office, in a building with excellent security and cleaning services holds general appeal. Corporate cleaning firms have improved their equipment, tailoring technology to meet the requirements of city offices. They provide the clean, pristine backdrop for polished urban living, far removed from the fears of dirt and germs associated with the city. Ballad of Caution is a monumental homage to the cleaner as a key figure behind the scenes of urban life. The large scale installation appropriates the volume of the building, its featherweight construction underlining the fragility of the structure.

Bodyweather Amsterdam
Something here that is not there
Dance performances

Rapidly becoming a new commercial centre, the Zuidas is also becoming an artistic hot-spot. The Zuidas Virtual Museum Foundation (ZVM) has been working to promote a vibrant, high-quality, inspiring artistic climate there since 2003. In the area of art and public space (or co-constructing, as the ZVM likes to call it), the ZVM is currently developing a number of projects. In addition, the ZVM organises support activities such as Virtual Zoom – in which artists visualise the transformation of the Zuidas – and Free Spaces – an Artist-In-Residence project in which selected artists are invited to immerse themselves in the Zuidas, and create work in response to it. The ZVM also organises exhibitions and temporary art projects. In the exhibition, the ZVM will present a selection of projects including work by: Krijn de Koning, Giny Vos, Jennifer Tee, Wynolt Visser, André van Bergen, Rob Schröder, Ingo Giezendanner, Jasper Wiedeman, Pieter Wackers and Patty Groot Bluemink.
www.virtueel-museum.nl

In the early nineteen-sixties, lattice-fronted department stores were all the rage. The exterior of the boxy structures was instantly recognisable from a distance and the interior offered maximum product display space. For the  ‘Horten’ department store, German architect Egon Eiermann designed a façade based on stylised ceramic shapes in the form of the letter H. This shape was used as the basis for other department stores, making the architecture an element of corporate design.

With Hertie Zuidas Trasberger presents a visual exploration, using the demolished façade of the ‘Hertie’ department store in Berlin-Neukoelln in the contemporary frontage of the Zuidas. Part of the façade of the New Amsterdam building is encased in grid-patterned sheeting. New architecture meets old, making visible the relationship between contemporary design and its Modernist past. Bernd Trasberger’s work can be seen in the exhibition BELVEDERE at W139, opening on 5 June.
www.w139.nl

For Software Sabine Mooibroek has compiled a special film programme for CASZuidas – Contemporary Art Screen Zuidas. The screened works were selected specifically for the location and highlight different aspects of the Zuidas, from the traces left in the (urban) space to money transactions and banking terminology.
www.caszuidas.nl

On the 4th of June 2009 African giant snails on a little peat island were drifting towards the Zuidas, the new Amsterdam business axis. Where would the winds and currents take them and how would they forever change the Zuidas landscape?

Cascoland followed the snails as they landed close to the WTC station at the Zuidas. Meanwhile in a nearby inflatable exhibition space, team members observed African giant snails, shooting video footage and recording the sounds of the snails eating andives. Real time three different images were captured that were projected inside the exhibition space. The first image was an extreme close-up of the snails, the other two livestreams of the procedings outside at the waterside. A continuous soundtrack was playing of the amplified sounds of the snails eating.

An interested audience were informed about the lives, habits and survivaltactics of the African giant snails and about how they have spread and influenced biospheres in many parts of the world. However, the way they have reached and influenced these biospheres depended entirely on unexpected acts of nature and confluences of circumstances and influences. Analog to the development of the Zuidas.

Software is part of Cosmopolis 2025, an Amsterdam Bright City initiative. Get involved in the Art and Culture expedition: www.amsterdambrightcity.nl

For further details and for more information about the programme, contact Alexandra Landré at the Lectoraat Art & Public Space: a.landre@rietveldacademie.nl 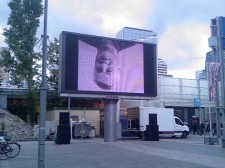 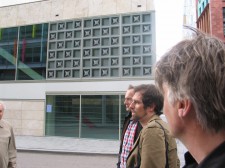 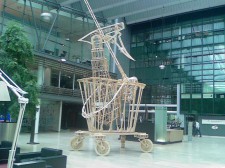 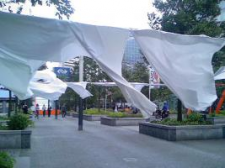