The Berlin artist duo Nina Fischer / Maroan el Sani will be exhibiting in Stedelijk Museum Bureau Amsterdam next spring. The duo will present work created during their five-month residency at Zuidas (South Axis), Amsterdam, where they will be staying until the end of March 2007. The exhibition at SMBA will focus on specific features of this new office district currently under construction.

In 2001, Nina Fischer and Maroan el Sani start to work on several installations and projects which focus on the former East German Palast der Republik in Berlin. The building had been deserted since 1990 and the interior completely stripped to rid it of asbestos. For a long time, the building languished in an ambivalent twilight world with a powerful lobby campaigning for complete demolition and the rebuilding of the old city castle on the one hand while on the other supporters pleaded for its reconstruction as a monument to the Communist utopia once embodied by its futuristic 70s interior. Fischer / El Sani explored this shadow zone, their reconstructive installations speculating on potential contemporary uses for the building, such as a night club, that are a more accurate reflection of the Wende’s legacy to the city. In various installations they juxtaposed these different states of what could be meant with ‘the utopian’.

Since this project, the modern and modernist building that bears the unmistakable traces of the era of Grand Narratives has been pivotal in the work of Fischer / El Sani. The duo filmed in the former Rundfunkzentrum in Berlin, where propaganda radio plays were once made and broadcast for the East German Republic, the old Bibliothèque Nationale in Paris and in the headquarters of the French communist party designed by Oscar Niemeyer. The aesthetic films that resulted contain surreal incidents which make frequent playful references to the illustrious past of avant-garde film by directors like Resnais, Antonioni and Tarkowski – filmmakers in whose work emptiness and anticipation play a vital role.

The project that Fischer and El Sani are currently working on in the Amsterdam Zuidas concentrates on the complex relationship between the visual language of a building, its psychological effects and the political-economic reality in which it functions. The Zuidas is an economic hub in Amsterdam urban planning and, with its future connection to the High Speed Train and close proximity to the national airport, is particularly attractive to large banking and insurance conglomerates. Various head offices such as those of the ING and the ABN AMRO bank have re-located to the Zuidas. This has had radical impact on the architectural presence of the area and the large-scale reconfigurations sweeping through the district call to mind the unscrupulous

p.t.o. urban planning projects of the nineteen-sixties and seventies. However, since September the 11th, the optimistic mood of those decades has been coloured by something else: fear of terrorism.

Nina Fischer (1965) and Maroan el Sani (1966) have worked together since 1993. As a duo, they have participated in numerous exhibitions, including the Gwangju biennales in Korea in 1995 and 2002, the Berlin Biennale of 1998, the 1999 Liverpool Biennale, Manifesta IV in Frankfurt, 2002 and in the Yamaguchi Center for Arts and Media in Japan, 2005. ‘Palast der Republik’ was recently presented in the Hamburger Bahnhof in Berlin.

The Fischer / El Sani exhibition in Stedelijk Museum Bureau Amsterdam can be seen from 18 March until 13 May 2007. A retrospective catalogue of their work will appear during the exhibition, co-published by SMBA and with essays by a number of authors, including Jennifer Allen, Jeroen Boomgaard, Jelle Bouwhuis, Charles Esche, Boris Groys, Hou Hanru and Gabriele Knapstein.

The Zuidas residence of Fischer / El Sani is made possible partly by the Lectoraat Art & Public Space and the Virtual Museum Zuidas. 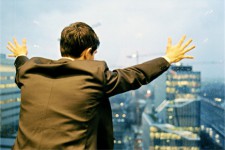