Everyone has seen them – the improvised structures in which homeless people shelter themselves. Washing machine boxes, plastic sheets, tarpaulins and pallets serve as the most important building materials. Most of the time we avert our eyes as we pass by. There is nothing romantic here. There is nothing fun about covering yourself in disused packing material and other cast-offs from the consumer society. But, if you take a closer look you will notice that there is almost always a little more to these structures. An addition that goes farther than the bare necessity of protection from the elements. There is the colored cloth that serves no particular purpose, a drawing, a shopping bag whose handle serves as a doorknob – all signs of private appropriation that give all this improvised shelter a character all its own. These little characteristics reveal that the helter-skelter homeless shelters are members of the universal family of odds and ends, contraptions, inelegant solutions and heartwarming inventions that all share the use of objects and materials for purposes for which they were never meant with something extra. It is the expression of an indeterminate thing that one might just call esthetic.

Ellert Haitjema photographs these structures. And, then he goes a step further. He adopts them and adapts them. He adds things and reuses them. It is as if he wants to be a member of this worldwide family. But, to what end? What is the payoff?

Wherever he goes, Haitjema records these carefully constructed improvisations – part of a set of furniture standing between some remote trees, a row of car tires half-buried under the sand, a sheepskin draped over a balcony railing, and some larger installations which seem to serve as shelters. He is cataloging them as he would an unknown life form. For this purpose, he uses a method that traces back to Carlo Ginzburg’s ‘evidential paradigm’ – a working method that combines such diverse fields as art connoisseurship, medicine and psychoanalysis,
and the skills of a detective. In this light, the structures form a literal trail consisting of detritus and useless fragments. An odd object hangs from an electrical wine. A stick supports a cloth in a conspicuous manner. Bundles are packed in such a way as to make you worry about their contents. These are all signs that seem to point to something, though just what is not clear. From these ostensibly thrown together (though clearly not neglected) assemblages which we see, but do not truly take in, Haitjema tries to form an idea – to distil a meaning. It is a Way of observing the world which, in Ginzburg’s view, has long been characteristic of the way hunters know how to track their game. “This knowledge,” he writes, “is characterized by the ability to construct from apparently insignificant experimental data a complex reality that could not be experienced directly.” But, what exactly is this complex reality and of what use is it to an artist?

When, in the second instance, Haitjema intervenes in these documented structures, he abandons his role as tracker and attempts to become part of the complex reality that he suspects exists by making its language his own. To gain a sense of this, it must first become clear what the semiotic system that is he joining stands for. Two things become apparent about the assemblages which he is photographing and in which he is intervening: They consist largely of materials that have lost their original function and they demarcate an area.

To begin with the latter point, the structures and additions are always covering something. They are protecting something or drawing a line between things. In some cases, the demarcation is barely perceptible, much like the nest of an unknown animal – packaging and additions piled up to create something unable to stand of its own accord. Yet, one way or another, they form a screen or fence of some kind. They have an outside and in inside, whether visible or not. In that sense they are the most immediate form of what Gilles Deleuze and Felix Guattari refer to as territory. These are examples of the most primary spatial demarcation which creates an area – or, rather, a stage – on which life can take place. And, because these structures must offer protection from the elements and provide a mark indicating that a living being has claimed this space, they take on aspects of the surroundings while attempting to differentiate themselves from it. In many cases, it is not clear where chance ends and intention begins. The borderline between the play of nature and choices of culture are vague. This ambiguous aspect explains the remarkable composition of these makeshift structures. At first sight they look like nothing more than a pile of junk blown together by the wind; a haphazard stack of old paper, rags, wires and plastic bottles. On closer inspection, however, they appear to have been carefully constructed and appointed with.a variety of subtle details. Only then does it become clear that there is a certain power hidden in the nature of re-use – anything goes in these installations, but nothing serves its original purpose.

Even if there is a clear function at work here – protecting a car or tying together some nondescript material – the packaging has gone on to lead a life of its own in the process, one which completely obliterates the material’s original function. Deleuze and Guattari refer to an assemblage’s increasing independence – the victory of form over function – as its gaining ‘expression’. By this, they do not mean that the user-builder is out to make his own internal demons public. It is the structure that is expressing itself. It displays the territory’s origins and, as a result, shows the user’s and the surrounding’s traces. What becomes visible is not the laborious manner in which people attempt to conquer a space for themselves by staking a claim somewhere with the help of disused debris but, rather, the origins of the space itself, which makes life possible. So, these assemblages do not take on their form in adherence to’ art as examples of their own esthetic sense or alternative design. Instead, they precede that artistic sense. It is an esthetic sense which arises prior to the decision to create art or to introduce the process of design. It is this ‘proto-language’ which Haitjema tries to make his own by practicing it. He works as the tracker, the hunter, the doctor, the connoisseur who can understand what he sees only by converging with it. Not by thinking about them but, literally, by following their traces, Haitjema comes upon places that would be inaccessible to others. To use’ Ginzburg’s vocabulary, he uses ‘low intuition’, to which Ginzburg adds, “It is the property… of hunters; of sailors; of women. It binds the human animal closely to other animal species.”

Now, in the final phase of his work, Ellert Haitjema is creating his own tracks. This does not give rise to some collection of exotica or a cabinet of anthropological curiosities. Nevertheless, it has its dangers. Precisely because these assemblages constitute a transitional stage between inhabitant user and surroundings, the lack of context can render them purposeless objects. And, because they have lost the pretext of a function, their specific esthetic power can also get lost in the process. Haitjema avoids this danger not by referring to the found images, not by romanticizing them, but by becoming them. He repeats the original gesture enclosed within these assemblages to activate their expressive power. For these images to work, they must once again stake out their territory and become expressive – they must establish a functional relationship with a specific environment while revealing the process of demarcation itself.

Haitjema’s territory is that of art. The artwork itself is the assembled barrier between this domain and the world that surrounds it. Yet, this sounds too simplistic. There must be a better way to describe it. One might say that the works create a barrier between the world of art as environment and institution, and art as a primary expression of genesis and emergence. When we take a close look at this work, we can see that – here, too – the suggestion of a function plays an important role. In some cases, the work creates an actual barrier. More often, though, it is composed in such a way as to make us think of a fetish in its original’ sense – an object from a forgotten ritual possessing special powers. At all times, however, the work’s most obvious function – that to which it refers to directly and which makes it part of its natural environment – is the notion of autonomy, which for two hundred years and more has been the most important function attributed to art.

But, by becoming ‘expressive’, this functional territorialization takes on another meaning. These works express the autonomy of the genesis of a form, the autonomy’of the coalescence of materials and meaningful fragments. This is not all about the autonomy of art, which artists can invoke as an achievement – an autonomy that defends itself through intractability and indifference to the rest of the world. What becomes evident is the autonomy that, in its deepest roots, exists in cohesion with the world. This is because the primary process of separation and individuation – the precondition for existing in the world – emerges in the work itself.

With his installations, Haitjema reverses the initial effect of his photographs. As charming as they are enigmatic, these structures which Haitjema finds everywhere in the world remind us of art. While this is so, his artworks carry us back to the motif from which these structures originate. The work connects to a kind of creativity that is stronger than the artist himself. It searches for traces back to the earliest forms of furnishing and formulation; back to the simplest – and most complex – choices with which humankind becomes territory. 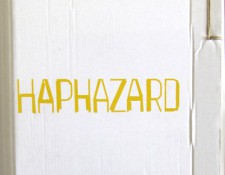