The ambitions underlying the Zuidas are ruled by the hegemonic ideology – the desire for the miraculous, perhaps – of becoming a major financial centre, with La Défense and La Rive Gauche in Paris, Potsdamer Platz in Berlin and Docklands in London as its premium examples. Is it possible to trace aspects of these desires in and around the Zuidas? And what are the consequences of these desires for the public sphere?

We would like to share our thoughts on building and public space, and would like to think aloud, and perhaps somewhat incoherently, about the increasing privatisation of public space and how this impacts our experience of ‘having access to something’. Or what it means for our experience of ‘having no access’, and what that means for the possibility of ‘building a community’.

Around 1980, the art magazine ‘Artforum’ circulated a questionnaire among artists asking them for their opinion and experiences with regard to changes in their audiences. The public and the public interest in art was as much an issue then, as it is today. Institutions asked themselves who their audiences were, where they went when not visiting the museum, why they did not visit them, and what that meant for the raison d’eÌ‚tre of those institutions and artists.

He choose, as we still do, for the second option, although we would like to note that art also occurs and manifests itself in areas other than galleries and art spaces. The gallery has mutated since Acconci, but the impact of his words is still valid. In Acconci’s words, it – the artspace- becomes ‘a community meeting-place, a place where a community could be formed, where a community could be called to order, called to a particular purpose.’ This comes close to what we would understand as ‘public sphere, or public realm’.

What does it mean if we, artists, abandon the museum or the gallery, and unleash our observations, our ‘anthropology’, into our everyday surroundings, into communal spaces shared by different communities, the space that we call public? It is not a coincidence that we use the term ‘anthropology’. Despite anthropology and art being different entities, we believe that they also have similarities. In modern anthropology, culture is understood to be central to human nature. In other words: our species has developed the capacity to view our world in symbols. We can learn and teach these symbols socially and we can transform the world (and ourselves) on the basis of such symbols.

Is there public space on the Zuidas? We would say there is none. It is telling that it seems to be impossible, at least up until this moment, to get a proper map, a floorplan of the Zuidas where the public space is indicated.

All space that is not occupied by the capital is space that is geared towards the same goals of the capital: quick and efficient transportation, of people and of goods. There is idealism, which is the ideal of the capital. This idealism creates the symbols. Access for any kind of public to do whatever, is in principle free, but in reality reserved for the target groups that are part of this machinery. The Zuidas is a hub, not a place to gather in your time, let alone your free time. But for the imagination to roam free, we may need a different type of public realm. Since The Netherlands is becoming more and more under the spell of ‘building mania’, thinking about what kind of public space we want is becoming more urgent. The question is more and more how we want to deal with this type of public realm that makes up a growing part of our surroundings, of our collective consciousness. A type of space that maybe even creates a specific type of imagination…

We believe art cannot just fill the gap. If we want another type of public realm, we should approach this realm as something crucial, we should not allow it to be just a stream-lined leftover area in between buildings and highways. If public interest interests us, we need to start to make these places actively an important part of the public domain, and look at things from a totally different angle, to equip us with the tools of imagining that what we see can be seen differently.

The past few months we have circled around our questions, doubts and criticism on our subject. If the public space cannot be traced, as we just stated, but in the only space that is vaguely called ‘public’, namely its streets and its squares, is it then productive to think of ‘public sphere’ as something symbolic, something that generates a transformation, we wonder?
Should we trace the ambitions and desires in the public sphere of the Zuidas differently? Is it possible to articulate and imagine its main symbols – success and luck – both so closely intertwined within our capitalist society – somewhere in the public sphere of the Zuidas? In other words, can we maybe locate it in the only sphere that we really share, the air? For us, this air– creeping in and between the architectural and physical structures, their function, and daily uses – has been the key, the starting point, in the sense of its potential to create an imagination that might be implicitly there, incorporated in its desire, and that might just need to be re-inforced: the smell of success of the Zuidas.

`this all has formed our guide line into a research that ranges from the possibility and impossibility of exactly tracing the public space, the influence of imagination in public space, our 5 – months long search for the ultimate and miraculous symbol of luck, the premonition of success: the four-leaf clover (of which we found 42 in the surrounding of the Zuidas), – and a study into the nature and smell of success, which should lead to a fragrance, expected to somehow be implemented in de Zuidas this coming year, in collaboration with a professional perfume specialist.

We have no answers to all our questions yet. For us this is just the beginning. 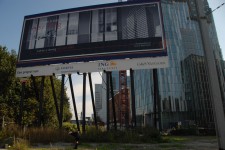