The story is about a man, who is standing at the window of his office in a high rise. He watches a twin brother who is climbing up the outside stairs of an adjacent office building. As if lost in a Piranesi engraving the man ascends the stairs of a building continuously (and when he thinks he has made it to the top, he only finds out that he has to start all over again.) An endless journey, through different weather zones, passing several obstacles, fighting against phobia and other opponents. On top of the building he discovers that someone is watching him: this person is himself. He turns around and is doomed to start climbing from zero again….

Ode to Daydreams
Right from the start, the Berlin artist duo Fischer and el Sani had their eyes on the office tower designed by American architect Rafael Vifioly. Especially the stairs, which wrap their way around the exterior of the building to the top, caught their attention. “I had never seen anything like it before,’ says Nina Fischer during her stay in the Zuidas.

Fischer and el Sani are known for their concern for the Palast der Republik in Berlin, a ‘people’s palace’ of the former DDR doomed to be torn down. In a scale model, they turned the building into a discotheque, and in photographs and films showed the polarization between a utopian past and a future that was declared superfluous. Since then, their work has revolved around the dreams and expectations that certain buildings evoke. They have filmed the abandoned Bibliothèque Nationale in Paris, the French Communist Party headquarters designed by Oscar Niemeyer, and now the Vifioly tower in the Zuidas.

While in the process of filming that half-occupied office building, they were also struck by the discrepancy between concept and reality. “We were told that the stairway was meant to be public space and would lead to a roof garden open to the public – a terrific idea.” Directly after the building was completed, however, the doors to the stairs were locked for security reasons. The stairway was useless, a relic of an dea, and “away with utopia”.

The Zuidas interests them for the same reason as did the Palast der Republik or the Bibliothèque Nationale. “It’s an area in an ‘in between time’ state, when everything is still possible. This creates a field tension between hope and fear. Will the high-flying expectations actually be realized? Will the Zuidas really become a dream area where companies want to locate their international headquarters and people want to live?”

Doppelganger
The film they ultimately made, The Rise, contains a similar tension. To achieve this, they read a slew books beforehand, delving for inspiration into architectural theories, philosophies on fear, Edgar Allan Poe, E.T. Hoffmann, and the writings and drawings of Piranesi.

During their Zuidas residency, they spent the greater part of the time on gaining permission to shoot their film on the stairway. Convincing those involved did not prove to be the biggest obstacle, however. The owner of the building, the administrator and the tenant were all equally friendly, according to the duo. The question of liability took much more time, for if the area is in principle public space, who is responsible?

Yet on a certain day the doors finally opened for them. They walked up the stairs and gazed upon a white, empty virginal expanse. Quite an impressive experience, says EI Sani.The day of filming will remain in their memories for a long time: it was the stormiest day of the spring, with the wind shrieking around the corner in an almighty din and the trees falling in droves.

In its setup and working method, The Rise fits seamlessly in the oeuvre with which they have been creating an international name for themselves since 200 I. But the details, especially the many splendidly clouded skies and the continually changing weather conditions, could not have been made without living and working on the spot.

The Rise, in which a man with a doppelganger futilely tries to reach the top, is indeed a thriller, but not a nightmare, explains Fischer. “It’s a visual experience, an ode to daydreams and fantasy.”

Invited by: Lectoraat Art & Public Space with the SMBA. 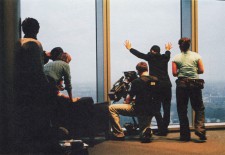 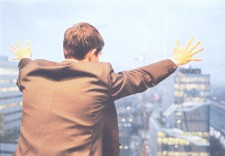