The Knight’s Move is a series of lectures by eminent international speakers who stand out by their unusual, enlightening and inspirational visions concerning the city, urbanity, the public domain, and community. Just as the knight moves in an atypical and unusual way across the chessboard, The Knight’s Move likewise wants to cut across all disciplines and thus stimulate rethinking the city.
Archive The Knight’s Move 2009-present

The Danish collective A Kassen works with performative installations and sculpture, humor and surprise, and their interventions are sometimes so discreet or absurd that they don’t get noticed. They might perform the actions themselves, but mostly use extras or even monstrous machines they construct. They examine and experiment with the borders between art and non-art, as well as self-invented systems that change the functions of things within a given space.

Ilka & Andreas Ruby founded Textbild, an Agency of architectural communication, in 2001 and Ruby Press, a publishing house specialized in books on architecture, art, and other cultural practices engaged in the production of space in contemporary society, in 2008. They are committed to contemporary architecture and design, write essays, design books, curate exhibitions and organize symposia.

The Knight’s Move lectures are made possible by Creative Industries Fund NL and the Haagse Bluf Fonds. 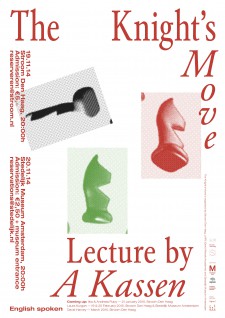