Henri Snel started a research on a dementia friendly neighbourhood with the Odense house, a day care centre for people suffering from early dementia (with a strong focus on art creation) and students from the department of inter-architecture from the Gerrit Rietveld Academie.

People with dementia are often alienated from society and ‘quickly forgotten’; to keep them connected to society we created a newspaper, to keep them connected to their environment. A newspaper specifically for them, for us it was ‘a quest’ how to design it, we did it through clear colored frames, bold words and simple titles lead them through this newspaper. Hopefully memories from the past and today’s topics will stimulate them to conversation and an updated present.

We created a editorial commission with people from the neighbourhood, participants of the Odense Huis, students of department of inter-architecture of the Rietveld Academie and many others to discuss the topics for this newspaper ‘each other week’ at the Alzheimer café Amsterdam-Zuid. Last Tuesday, 28 January, the newspaper designed by Mees van Rijckevorsel was distributed in the neighbourhood and offered to district director of the Amsterdam-Zuid Marco Kreuger. 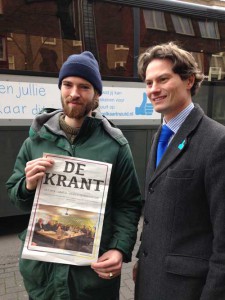