Art and the City

A Conference on Postwar Interactions with the Urban Realm

On the occasion of the international symposium ‘Art and the City: A symposium on Postwar Interactions with the Urban Realm’ on May 11 and 12, the Lectoraat Art & Public Space (Gerrit Rietveld Academie) organizes an accompanying event featuring contemporary artists Marc Bijl, Jakob Boeskov and Erik van Lieshout. These artists interfere with the public using strategies such as interventions and activism, by addressing indirect or direct political issues, or simply by creating images or counter images that reflect contemporary culture. They will show recent video work and will be interviewed by Patricia Pulles, curator at the Boijmans Van Beuningen Museum.

Jakob Boeskov confronts the mechanisms of governmental and commercial power systems. His strategies involve using fictional characters, companies and products to intervene in various structures, such as the American election and a Chinese weapons fair. He has a background in architecture and comics. Boeskov will give a lecture about “Magical art vs. political art”
addressing questions like: how does art affect the world and your own personal life?

Marc Bijl is interested in social structures and their (ab)use of slogans, logo’s, symbols and codes. His counter-cultural performances and (illegal) interventions, recorded on video, play with our perception of what takes place in public space while his installations, texts and objects are icons of temporarily fanaticism – the kind of fanaticism that can lead to nationalism, terrorism, religious fundamentalism and finally death. But, according to the artist, human nature is attracted to these simplifying structure methods (logos, symbols, political slogans, prayers, or even advertisements) more than it needs freedom to do without all that information. There is a romantic desire hidden in his attempt to understand the world we live in. Marc Bijl will show his recent film: “lest we forget” of 2006, among others.

Erik van Lieshout has increasingly manifested himself as an artist interested in installations. In his video productions he questions his own position with regard to other cultures in an often playful manner. And in approaching the question of what is politically correct or incorrect, he juggles with the established values. Van Lieshout’s will show his film ‘’Rotterdam-Rostock’’ (2006) about his journey through on his bicycle in order to get to know his neighboring country. The resulting video will be displayed inside a container on Auguststrasse as part of the current 4th Berlin Biennial.

Art and the City: A symposium on Postwar Interactions with the Urban Realm’ 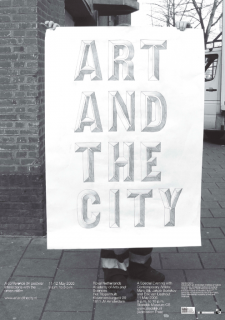