Surface Research is the presentation of a research project of the same name, which concludes the first Rietveld Research Residency. During his two-year residency, artist Henri Jacobs (Zandoerle, 1957) explored the fundamental properties of the surface, with a specific emphasis on the qualities of the surface and the part they play in the creation of an image.

Jacobs’ inquiries focused on two themes: the palimpsest, which enables the erosion of the surface drawings, and iconoclasm, where the destruction process becomes an artistic tool. Jacobs’ project concentrates on practical, visual research and systematically investigates the properties and transformations of the surface by making a drawing followed by scratching it out, and by cutting out, perforating and tearing images.The exhibition Surface Research documents the various stages of the process across a variety of media including sketches, film and photography and presents the final results, sometimes a completed work, sometimes a sketch, but always as an artefact of the research process. The exhibition is curated by Alexandra Landré.

The exhibition Surface Research is the result of the first Rietveld Research Residency (RRR), a joint initiative of the Gerrit Rietveld Academie and Netherlands Foundation for Visual Arts, Design and Architecture. The program offers mid career artists an opportunity to devote up to three years to a research project. The RRR is based at the Gerrit Rietveld Academie where a number of education projects are linked to the project. The second Rietveld Research Residency begins in January 2012.

The publication Surface Research, with contributions by Jeroen Boomgaard, Henri Jacobs and an interview with Tijmen van Grootheest and Lex ter Braak by Lucy Cotter, will be published to coincide with the exhibition. The book will be presented on 17 February 2012.

Henri Jacobs is an artist who lives and works in Brussels, Belgium. He kept a blog during his residency. 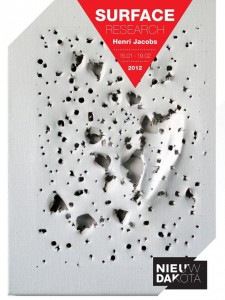