1.
Hidden behind the laptop

Master plan or not, the scale and the fragmentation of the South Axis are a cause of agoraphobia.
It is actually called ‘South Axis’ without the ‘the’, but at present that sounds a bit strange. In five years time, once we have got used to it, nobody will even notice the missing definite article in the name South Axis, but we shall need to hear it a lot first.
No need to panic. Just breathe deeply. Concentrate on one part that reflects the process as a whole. The fractal theory is probably appropriate here somewhere.

So if you have to focus on something, why not opt for the ING House, the wannabe futuristic office structure that everyone thinks is fan-tas-tic despite the countless derogatory nick-names.
The construction has its own website offering people virtual guided tours. The descriptions of the building’s architecture, furnishing and panoramic views remind one of the hypermodern office block visited by Monsieur Hulot in the film Playtime (Jacques Tati, 1967), a source of unending confusion to Hulot. He was constantly confronted with the latest technological gimmicks, which kept appearing unexpectedly throughout the towering office block. The modern technology so overwhelmed him that he became increasingly awkward and self-conscious.
However, the other visitors seem perfectly comfortable with their role as characters charged with showing the building to its full advantage.

The Boardroom comprises a partially glass floor, which extends into a curved, diagonally rising glass wall. Wide slats act as sun blinds. There is a westerly vista across the Nieuwe Meer, and you can see a large part of the orbital road. Schiphol can be seen in the distance. The size of the conference table can be adjusted.

One thing clearly sets the ING House aside from the office block in Tati’s film; where Tati reduces the plant kingdom to a single chrysanthemum on a lady’s hat, plants are definitely the x-factor in the ING spaceship. They are the symbol of quality, sustainability and growth, and will silence all criticism:

The atmosphere in the northern loggia is rather like a jungle. The garden here joins the eastern and western parts of the floor. The inner courtyards are seen as the visual highlights of the building.
This floor provides a view of the huge outdoor patio that begins on the 8th and where eight Scots pine-trees grow between the royal ferns and the bilberries.
The palm hothouse is used for functions. Farewell or anniversary parties are held between the eight tall Livingstone-palms in mobile pots. A special design means that they can also be used as high drinks tables. Not an everyday function hall.

In reality, the building has been placed on a grassy Teletubby-style grass slope.

However, according to quotes from interviews with staff working on all floors of the building, it is a great place to work. At last; happy employees. On the website, a member of the board of governors brightly remarks:

“This building has far more allure than the old one. It’s a fantastic place to work – the real optimum working environment with an exceptional amount of space for interaction.
I use the glass stairs connecting the 8th, 9th and 10th floors all the time – not only because of the short lines of communication, but to get some extra physical exercise too.”

It is 23rd March, a fact that is corroborated by the outside world. There are no more excuses for avoiding the South Axis any longer. You are welcomed to the WTC square by a forest of traffic signs instructing and prohibiting you. I quote:
“Those who do not park their steel charger in the overfull racks will not be immediately shot, but their bikes will be escorted directly to the ‘home for stray bikes’ near Halfweg. NB; the costs of cycle locks will not be reimbursed.”
People in two-piece suits eat their Ciabatta Mozzarella in the glaring sun. They sit on the wide rim of a plant pot in which scrawny new trees have been planted. The plant’s nameplates are wider than their trunks.
A photo shoot is being held in the gleaming sandwich bar on the ground floor. A girl holding an apparently superfluous reflective screen is flirting with one of the older crew members. She brandishes the screen to conceal her shyness.  Here too, filming is a glamorous waiting game. The scene in question is about a boy in a sand-coloured suit eating a Mozzarella roll. The suit gives the game away; only people in films wear sand-coloured suits.

The fragments of text in frosted letters on the glass doors of the project bureau are at odds with the design in the rest of the WTC building. Three wall-size pictures of the area are on display inside. To the left is a floor-to-ceiling aerial photo; a hand-drawn map hangs alongside it and an outlined diagram of the South Axis can be seen on the wall to its right.

The human points of contact swap lunch ideas over the office hedge.
Transparent holders containing shiny A4 brochures about projects in the South Axis have been attached to a pillar in the open area; Gershwin, Vivaldi, Mahler. One of the brochures portrays a recently finished building as a utopian airbrush projection. The terrorist cracks in the shiny facade are part of the design. Post-retro-modern is probably the best way to describe it. The brochure boasts that the building took a little more than a month to construct thanks to a process using ‘sliding formwork’, which involves pouring concrete 24 hours a day from the bottom of the construction pit up to the current height of 95 metres. This represents 3,166667 metres per day. This may not seem a lot, but it is.

A large scale-model occupies half the space. Changes of scale are always welcome, particularly if they help you to grow.
From this angle, pondering the possibility of erecting a future town centre, while not referring to it as such, feels comfortable. It would be difficult for an artist to be anything but sceptical about the artificial (or perhaps ‘affected’ would be a better word) way in which headway is made here, but cynicism is not constructive in the light of progress.
The only real function of an artificial structure is to intercept the element of chance. But even without the use of controlled chance, we are still left with an autistic 1:1 scale-model and the only factor left to chance is the chewing gum on the pavement.
So this, in a nutshell, is the job of the artist. Tearing across the South Axis armed with a butterfly net in pursuit of chance. Perhaps we could try saying: tearing across South Axis, or do we still need the ‘the’?

Take a quick photo in the hall of the WTC and then off we go again.
The guards are nowhere to be seen, until you take a photo of course. Feign the innocence of an ignorant tourist and you are no longer seen as a suspect.

2.2
Off the beaten track

What really strikes you when cycling across the South Axis is the deafening noise. An infernal racket. Unbearable. The building work, the motorway, the train, the aeroplanes, the wind. Only the strongest would survive here. This is one of the very rare occasions that the word pandemonium springs to mind. The realisation that this word was first used in John Milton’s epic ‘Paradise Lost’ does little to improve matters.
Optimists and project developers with Euro signs in their eyes think that this building noise will eventually stop. But what then? We shall hear Vivaldi, or Mahler-4.

Although mankind has made considerable changes to its living arrangements since the Stone Age, scientific research shows that we still operate at a rudimentary level.
Imagine this: a pair of Jacksonii  chameleons scale down their living conditions to live in a hypermodern interior, where their daily ups and downs are followed continuously by a camera (does this ring any bells?) The apartment is equipped with the best Vitra design furniture and an indoor fountain-sculpture, and natural elements have been incorporated in an abstract form.

The graceful and controlled movements of these exotic animals are in perfect harmony with the sharp lines of the house, but the fact that their behaviour has not changed since prehistoric times will eventually have a destructive effect on their environment; excrement, flies and half-chewed cockroaches will disfigure the interior.
Could we accelerate the evolution of these prehistoric creatures if we put them into a modernised environment instead of always keeping them in simulations of mossy rockeries?

The most striking feature of the Jacksonii chameleons is the three large horns on their nose, which are completely out of proportion with the rest of their body. This characteristic feature gives the animals an unnatural appearance. They look like deformed Disney characters created by a designer as a Friday afternoon joke.
The scale-model of the South Axis could be an alternative ecosystem for our Jackson’s chameleons. The resulting film would be very much like one of those wooden cartoon fantasy monster films, such as King Kong from 1933, which only work because they are so appealingly pathetic.

Back to the bike. I pass a white outline drawn on the road; the contours of a body. I suddenly remember my former mother-in-law, who was knocked down and killed while cycling through the Amsterdam woods by an absent-minded lorry driver. The incident occurred during the very last hours of his working life, on the day before he took retirement. When blind spot mirrors were still under discussion.

A
Ambition – Everything begins with this. The story does not say what begins with it.
Art – Has a difficult time everywhere.

B
Beethoven – Important composer. Troubled by deafness.
Being accessible – Is nowadays a quality that stands by itself. You are nowhere without it, both physically and virtually.

C
Concept vision – An idea with ambition whose content will presently appear.
Composer – Has nothing to do with composers except the word.

D
Development – You can push or pull the cart.
Dock model – When accessibility and aesthetics do not coincide.
Durability – Word that you use if you have had enough of the criticism that you are only interested in money.

E
Energy – Something you can cut down on.
Environment – Does not mean surroundings here either.
Environmental planning – Term that removes fear of the new.

I
Infrastructure – Is always open to improvement.
ING House – What people in the past thought the future looked like. Popular building in spite of general consensus that it is ugly.

J
Junior Professionals – the more professional they are, the faster they will become senior.

M
Mahler – Important composer. Putting a number after the name turns it into a title.
Museum site – Piece of land that no bank is interested in.
Master plan – Great idea, usually thought up by one man. See: Pi de Bruijn.

O
Original principles – Ambition and Strategy translated into A4 format.

P
Peace and quiet – What everybody is trying to find.
Pedestrians – Usually get in the way. Work wonders for the décor in brochures.
Pi de Bruijn – See: Master plan.
Play – Something with marbles.
Public space – Not for bicycles outside the bicycle racks.

Q
Quarantine – Is usually the word under Q.

R
Recreation – Seems to be important, but nobody can explain why.

U
Utopia – There has to be something left to dream of.

W
WTC – Once stood in the desert. Building where it all started. See: Ambition.
Water – Human beings consists for 64 per cent of water.
Wind nuisance – There are no problems, just challenges.

X
X factor – Used to be called having it.

Y
Y Bank – Bank of the River Y. The intellectual younger brother of the South Axis.

Z
Zuidas – Dutch for South Axis. Try to use it without the definite article. 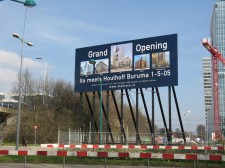