The smell of success by Bik van der Pol

Artists From the Netherlands, living in Rotterdam
Recommended by Lectoraat Art & Public Space/Stedelijk Museum Bureau Amsterdam
Plan investigate whether there is a public domain in the Zuidas and if so, precisely where it is to be found; then develop the perfume ‘The Smell of Success’

‘Success is almost the same as happiness: everybody desires it and pursues it. Success is very important for the Zuidas. We wonder whether the smell of success can be found in public space, which, ideally, is a domain where people can meet, exercise political influence and speak freely about social issues. Does such a space exist in the Zuidas or is it an ostensible, virtual space? We want to define the smell of success by working together with a “nez”, a person who makes perfumes, and with people closely involved in the public aspect of the Zuidas.’

The smell of succes

Perfume – derived from the Latin per fumum, meaning ‘through smoke’ – is a mixture of fragrant essential oils, aromas, fixatives and solvents, used to give the human body, animals, objects, and spaces a pleasant smell. The combination of odours in our environment is usually registered in passing, unnoticed, and sometimes even subconsciously, although we can suddenly become conscious of a smell, for example, through its evoking a strong sense of another time or place or a strong desire.

The public realm – or in this context more appropriate, ‘sphere’ – is the diversity of spaces where people meet, freely discuss and articulate societal issues and conflicts, and through that discussion influence political action. It is a discursive space. The public sphere can thus be seen as ‘a theatre in which political participation is enacted’, a realm in which public opinion can be formed.

The ambitions underlying the Zuidas are ruled by the hegemonic ideology – the desire – of becoming a major financial centre, with La Defense and La Rive Gauche in Paris, Potsdamer Platz in Berlin and Docklands in London as its premium examples. Can these ambitions and desires be traced in the public sphere? Is there such a thing as a ‘public sphere’ at the Zuidas? And is it possible to articulate the public sphere through notions of public and private ownership, either physical or virtual? In other words, can the smell of success of the Zuidas – including its architectural and physical structures, its function, its daily uses – be located and defined through the public sphere? Is it possible to define this smell?

Research in these issues should lead to the ‘Smell of Success’, expected to be launched this coming year. 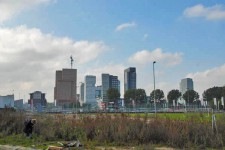