Considering theory and practice in the arts as, on the whole, ‘diametrically opposed’ only serves to create polarization; while theory and practice are, in fact, interwoven. The question of how polarities such as theory and practice, form and content, progressive and conservative, etc, can be mediated, has no easy answer.  The notion of ‘concept’ in the visual arts has it origin in philosophy. My interest in this notion came about because it appeared to offer opportunities for the cohesive reflection on various dimensions of artistic  practice and teaching. But to what extent can this notion be applied in visual arts in practice?  Conceptualization occurs at the moment of application; in other words, when theory and practice are simultaneously evaluated.   Rather than working with the ethical/philosophical ‘concept’, a notion indebted to the modernist principle of autonomy, I propose using a singular artwork – Vermeer’s ‘Allegory of Painting’ – to reflect other artworks. At first sight this may seem random in terms of method, although not in intention. I intend to research how an approach such as this can be transformed methodically, and what the possible arguments for this method might be.  Analyzing the Vermeer painting allows me to work on aspects that intrigue me in my own work, whilst also being a way of ensuring I don’t overlook the tradition within the concept. If progressiveness acquires fetish status, the visual arts may no longer be conceptual.

Hermann Gabler studied at the AKI, Enschede and Rijksakademie, Amsterdam. As artist, he began writing texts before turning his concentration entirely to painting. He still uses text in his visual work. Herman Gabler has been a lecturer at the Fine Art Department of the Gerrit Rietveld Academy since 1991 and, since 2002, has also been organising exhibitions with the work of other artists. 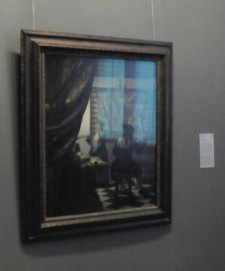